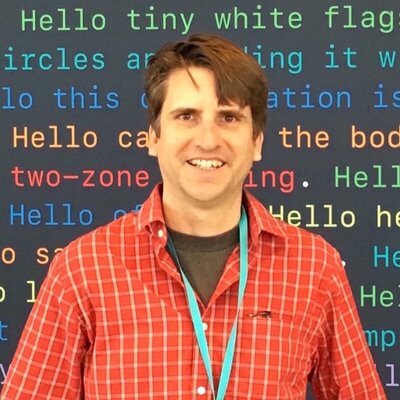 Description: Join us for an update on Swift. Discover the latest language advancements that make your code easier to read and write. Explore the growing number of APIs available as Swift packages. And we’ll introduce you to Swift’s async/await syntax, structured concurrency, and actors.

Swift 5.5 is the best release yet, including:

❤️ The heart of the Swift Project is not the code but the community.

Diversity is a core value.

Evidence shows open source projects that have a diverse community with a wide set of perspectives helps the community thrive and the project make better decisions.

"The mission of Diversity in Swift is to foster an inclusive Swift community by creating more pathways for a diverse group of developers, increasing the engagement and retention of those developers, and helping developers of all backgrounds establish leadership and technical expertise within the community."

Highlight a variety of voices in the community. Community groups to help those with a similar background get started.

Being able to find and use open source packages is an important part of the ecosystem. The community built Swift Package Index to help with this. 🎉🎉🎉 Aside: Thank you Dave Verwer, Sven A. Schmidt. and others.

In Xcode 13 and Swift 5.5, you can find packaged directly.

Example: a set of packages for a computer science class, a set for a specific problem domain, organization, etc.

Deque has a fast O(1) append and prepend operation

Ordered set is like an array in that it maintains order and random access but like a set because it makes sure elements are unique (and has fast lookup).

Ordered dictionary is an alternate to dictionary when order is important or you need random access to elements.

Open source package of algorithms on sequence and collection types. There are already over 40 algorithms there.

There is a session about algorithms and collections and how you can use them to make your code better.

There are four other sessions about this

As an example, now less than a tenth of the files rebuilt after a module changes resulting in a one-third speedup. Incremental builds.

The first part of the compiler (the driver) is now written in Swift. It is now the default.

The compiler now uses a smarter way to track references and can eliminate retain release traffic.

There is a session about this.

The SE standards for Swift Evolution.

What follows is a series of examples of how these features can simplify your code.

You can use property wrappers can now be used on function (and closures) parameters.

The before and after is pretty remarkable!

In Swift you can pass a binding to SwiftUI List to get access to the projection and wrapped value.

There is a session about this.

It makes your code simpler!

Later, after the network request finishes, the callback happens. Only then can you deal with errors, which can be awkward.

The await will suspend the operation but not block the thread so other work can continue on that thread. This allows a small number of threads to be shared among several asynchronous processes.

The code can then continue inline making it easy to follow.

There are other sessions about this.

Concurrency builds on the async/await idea.

The async let spawns off another concurrent operation.
The merge operation has to be marked with an await to signal that this thread may suspend. This function will not return until the background tasks complete. Even if an error is thrown, Swift will ensure everything completes before returning.

Swift will signal unfinished tasks that an error was thrown as an optimization. The Structured concurrency in Swift session describes this in greater detail.

This is another concurrency construct that helps you manage shared mutable data. Here is an example that will corrupt if accessed from multiple threads:

The fix is simple. Change class to actor:

The Swift compiler prevents corruption by suspending operations until it is safe to make the change. That is why you typically need to call them with await.

They also work with async/await.

Actors are like classes (reference types) but allow the Swift compiler and runtime to protect against data races.

There is a full session about this.

Make Swift 6 better by telling swift.org about your experiences!

You can try a new compiler toolchain!

Participate in the forums

Participate in the mentorship program. The only requirement is a desire to improve Swift for everyone in the community.

Swift enthusiast, contributor at RayWenderlich.com, microscope builder at discover-echo.com. I like cats.