Description: It's now easy to create an app for fitness or sports coaching that takes advantage of machine learning — and to prove it, we built our own. Learn how we designed the Action & Vision app using Object Detection and Action Classification in Create ML along with the new Body Pose Estimation, Trajectory Detection, and Contour Detection features in the Vision framework. Explore how you can create an immersive application for gameplay or training from setup to analysis and feedback. And follow along in Xcode with a full sample project. To get the most out of this session, you should have familiarity with the Vision framework and Create ML’s Action Classifier tools. To learn more, we recommend watching “Build an Action Classifier with Create ML,” “Explore Computer Vision APIs,” and “Detect Body and Hand Pose with Vision.” We also recommend exploring the Action & Vision sample project to learn more about adopting these technologies. Whether you are building a fitness coaching app, or exploring new ways of interacting, consider the incredible features that you can build by combining machine learning with the rich set of computer vision features. By bringing Create ML, Core ML, and Vision API together, there's almost no end to the magic you can bring to your app.

We can use our iPhone or iPad as a coach. The device can observe what we're doing and give us good, real-time feedback.

We already have the perfect tool in our pocket:

Today in sports and fitness

We can go beyond watching a video to learn how to do an exercise. Common forms of analysis:

The example in this session analyzes a simple-to-understand sport: bean bag toss. There's a simple application that can be downloaded. 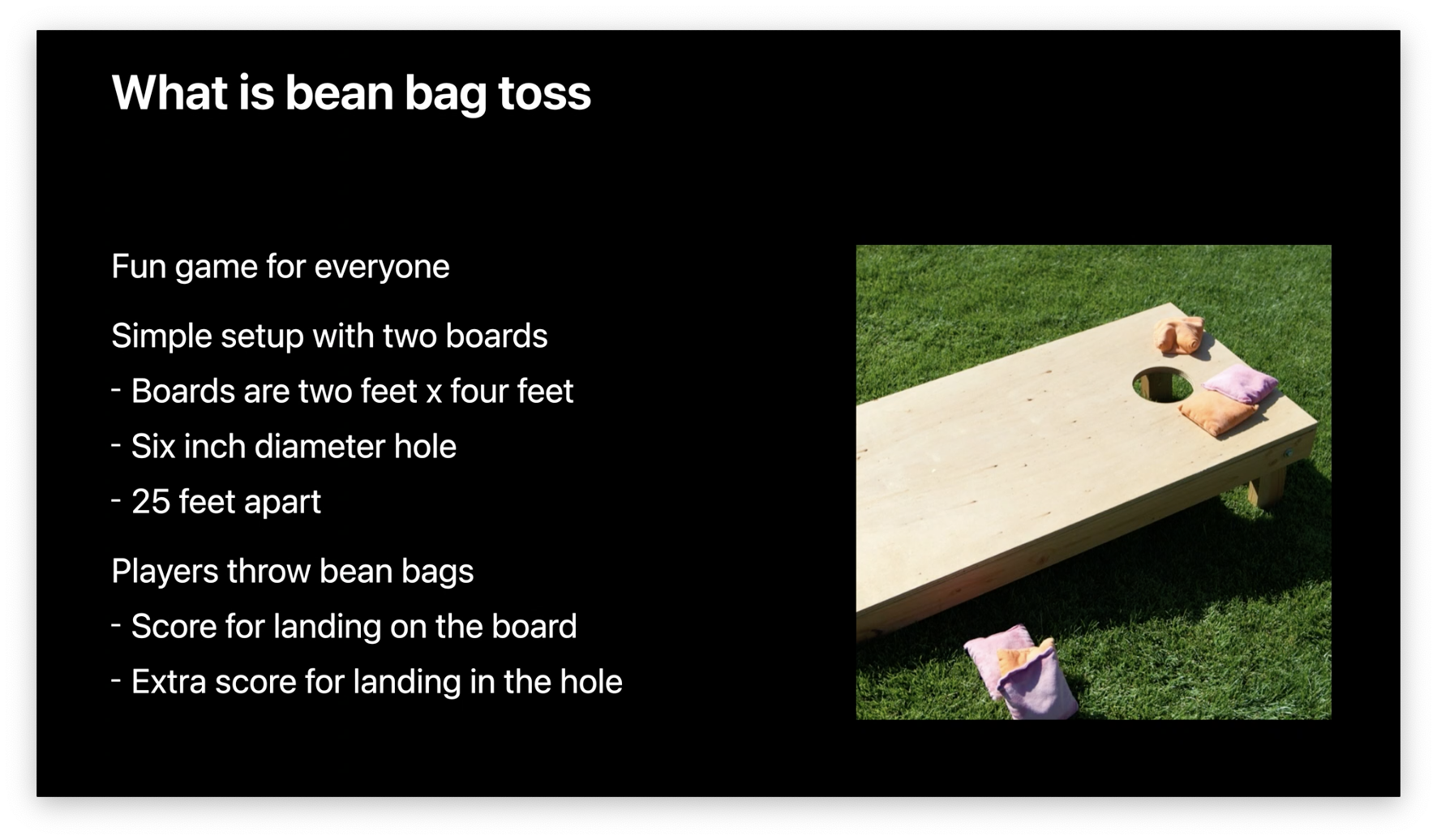 Everyone wants to win! Some questions we may want answered:

After training the model, Apple ran inference through Vision.

Why fixate the camera?

Some algorithms require a stable scene. Also, the playing field only needs to be analyzed once.

Another benefit is that, once the device is stabilized, we can assume the user wants to start analyzing. Therefore, there's no need for a "start" button. The user doesn't have to touch the screen at all.

VNTranslationalImageRegistrationRequest analyzes movement from one frame to the next. Once the pixel-difference between 2 frames is below some threshold, the device is considered stable.

VNDetectContourRequest uses the bounding box we got from our object detection as a region of interest. These contours are then simplified for analysis.

VNDetectHumanBodyPoseRequest gives points corresponding to a person's body joints. We can then analyze joint angles using these points.

This data is also used for Action Classification.

Most of the video from this point on is about the sample app's source code. To follow along, download the Xcode project from this link. These notes attempt to capture the main take-aways from each portion of the source code discussed in the video.

How does the app progress through stages of the game?

The app uses a GameManager to manage its state and communicate changes to that state with its listening ViewControllers. Here's how the GameManager singleton is initialized, directly from the sample project:

You can get an overview of the Storyboard by watching 10:25-10:58, but it doesn't seem necessary for the big picture. Essentially, RootViewController controls the rest of the app.

RootViewController has an extension where it conforms to the GameStateChangeObserver protocol and figures out which overlaying view controller to present. The options are:

Both SetupViewController and GameViewController also conform to GameStateChangeObserver. This means that they also listen for updates on game state and they become the current CameraViewControllerOutputDelegate.

In viewDidAppear(), this view controller creates a VNCoreMLRequest using the object detection model. This model was made using Create ML's Object Detection Transfer Learning algorithm in the Object Detection template.

As SetupViewController starts receiving buffers through CameraViewControllerOutputDelegate methods, it starts performing Vision requests on each buffer in the detectBoard() function. Here, the app takes object detection results and filters out results with low confidence. If it finds a result with sufficient confidence, it draws a bounding box on-screen around the detected object.

In live camera mode, the app tells the user to align the bounding box with the board location guide, which is already present on the screen. Otherwise, in video playback mode, the app assumes that the board is placed on the right side of the scene.

The checkSceneStability function contains a VNSequenceRequestHandler because checking scene stability requires performing VNTranslationalImageRegistrationRequests across a series of frames. It then adds the frame points to a sceneStabilityHistoryPoints array.

The detectBoardContours() function performs a VNDetectContoursRequest and sets the region of interest to the board's bounding box. This means the request will only look for contours in that region.

The analyzeBoardContours() function performs analysis of the top-level contours to find the board edge path and hole path.

The SetupViewController's responsibilities are now done. It has detected the board and its placement, ensured the scene is stable, and detected board contours.

As GameViewController receives input buffers from the camera, it performs a VNDetectHumanBodyPoseRequest. The results are passed to the humanBoundingBox(for:) function. This function filters out low-confidence observations and returns the bounding box of the person who enters the frame.

The VNDetectTrajectoriesRequest finds moving objects while attempting to filter out noise movements. It does this by comparing differences in frames.

VNDetectTrajectoriesRequest is a stateful request, which means it builds state over time. This also means that we need to keep the request around, which is not mandatory for other requests in Vision.

A few frames down, once there's evidence of movement, a VNTrajectoryObservation is reported. However, we still know the time at which the trajectory started. This is contained in the timeRange property. 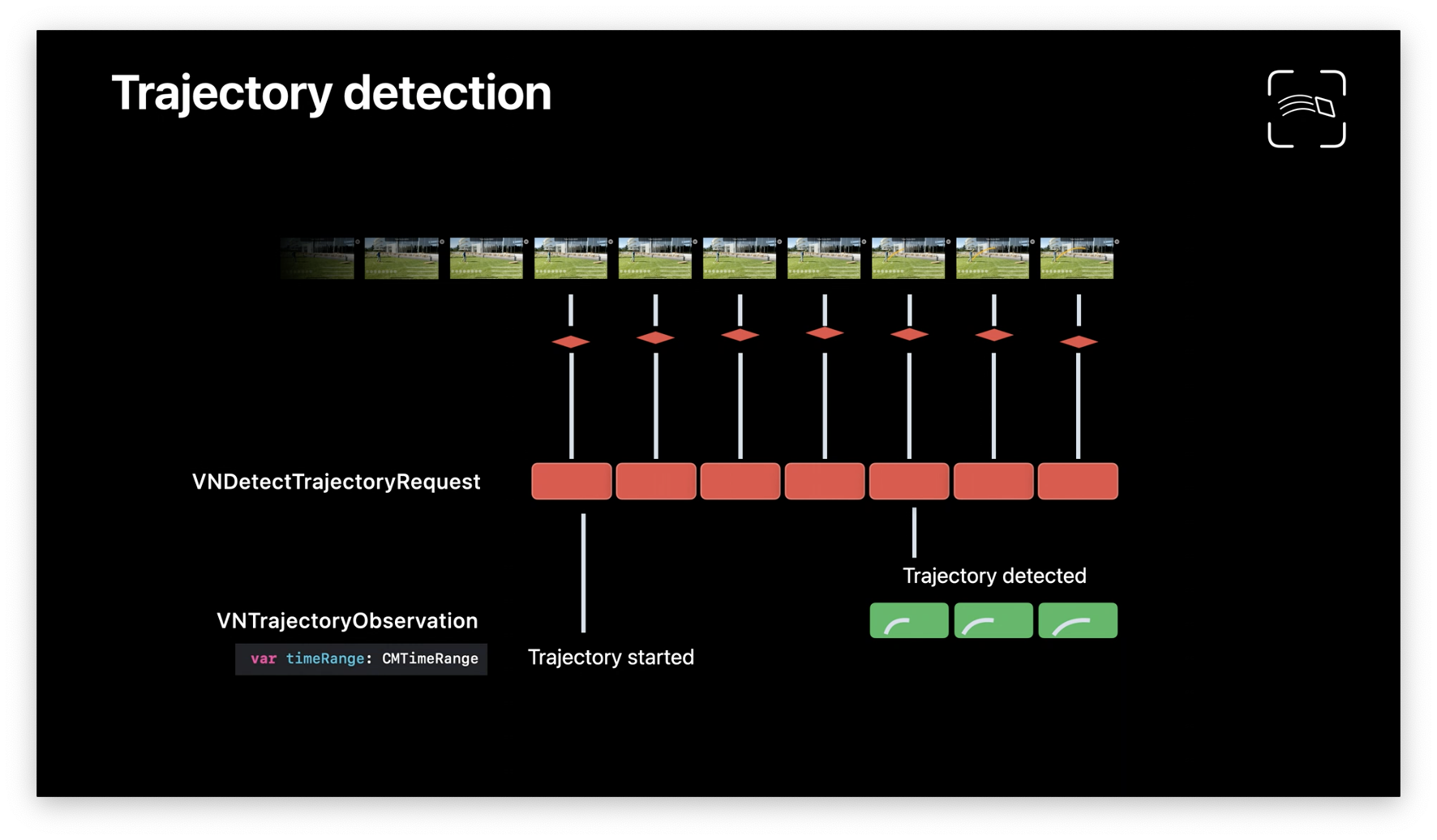 Some more information on VNTrajectoryObservation:

It's important to note that trajectory detection is happening on its own queue separate from the camera queue.

Things to keep in mind with trajectory detection

It's important to note that trajectoryView.points has a didSet observer which calls updatePathLayer(). This function updates the trajectory path in the view. It also checks if the trajectory points are within the region of interest. Lastly, this function calculates the release speed of the throw. 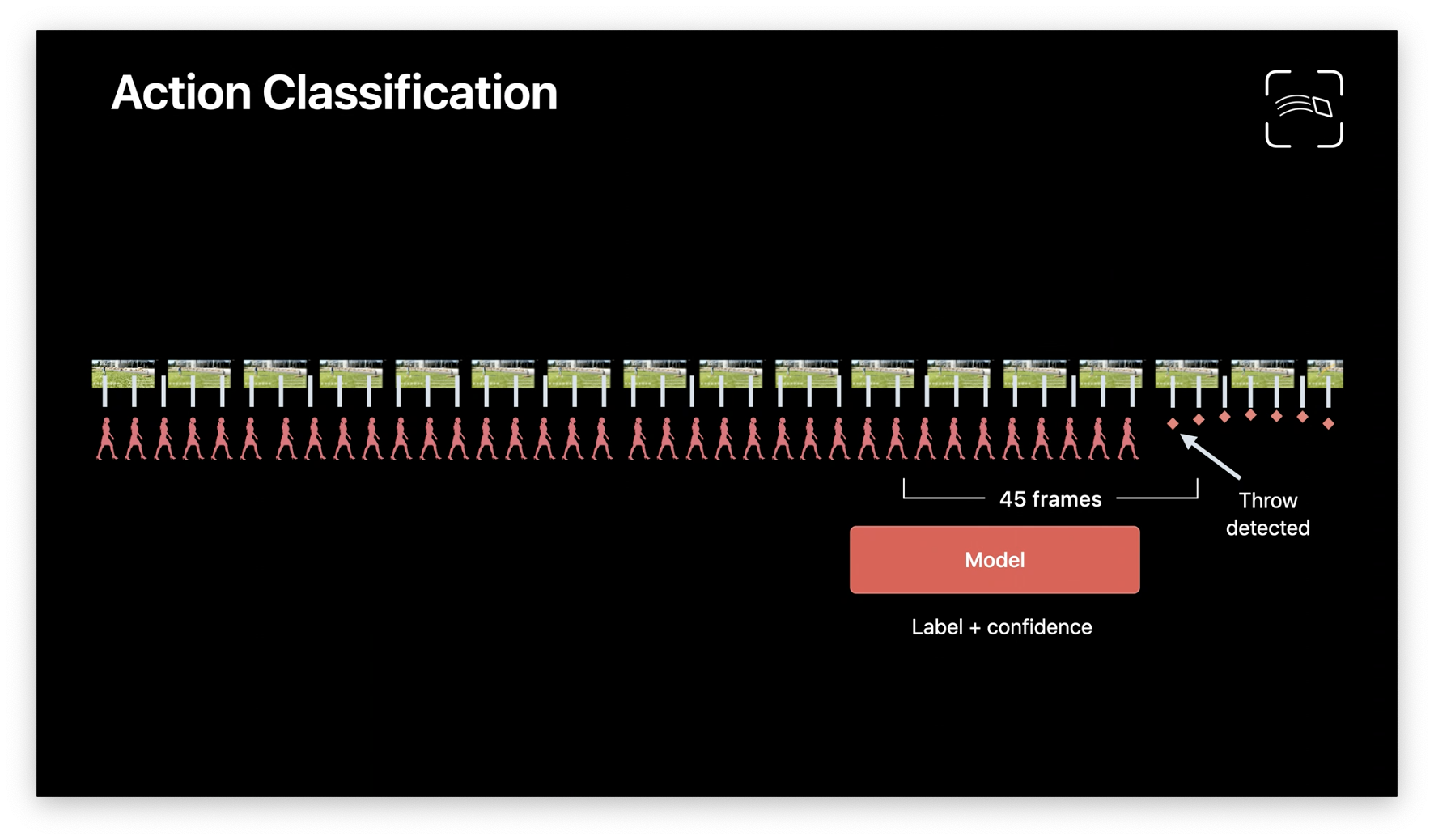 To determine the last throw a player made, we can go to the cameraViewController() delegate method inside GameViewController. For each buffer received, the method is also performing a VNDetectHumanBodyPoseRequest and storing those points as observations. Those observations are using in the humanBoundingBox(for:) function and used as input to the Action Classification model.

Once a throw is complete, the player's stats are updated. At this point, playerStats.getLastThrowType() is called. Here's the implementation:

We want to calculate the size of the field. We know the physical size of the board (4' x 2'). We measure the contour of the board. From this data, we can calculate a mapping of pixel measurements to the real world.

We also know that the trajectory is in the same plane as the ball. So, we can calculate the speed using the size of the real world.

We can also calculate the release angle using:

In code, the updatePlayerStats() function gets the release speed, trajectory, and release angle of the throw. When the app first observes a trajectory, it calculates the length of that trajectory in pixels. This can be converted to a real-world distance using the game board length as a reference.

The release angle is calculated in the getReleaseAngle function, which uses the angle between the forearm and the horizontal plane:

Model input data should be as close to real-world usage as possible. The input data for object detection was:

Similarly, Action Classification data was captured with iPhone at various distances and angles.

Initially, throw classifications were just "underhand", "overhand", and "under the leg". However, all actions, such as picking up a bean bag, were recognized as one of those 3 actions.

To account for these additional situations, Apple added another Negative class of actions, where people were not throwing bean bags. Doing this helped the model's performance.

Another issue was figuring out the correct prediction window. It needed to be set to capture the entire target action. Apple settled at 45 frames.

A final issue was figuring out how frequently to run prediction. For this app, frames were sent once a throw was completed.

We can use the following delegate method from AVCaptureVideoDataOutputSampleBufferDelegate to be notified when we drop some buffers:

Here's some code from the project (type-annotated for clarity):