In ARKit today, we can place objects in the real world. We would expect items to be hidden, or occluded, by a person closer to the camera. 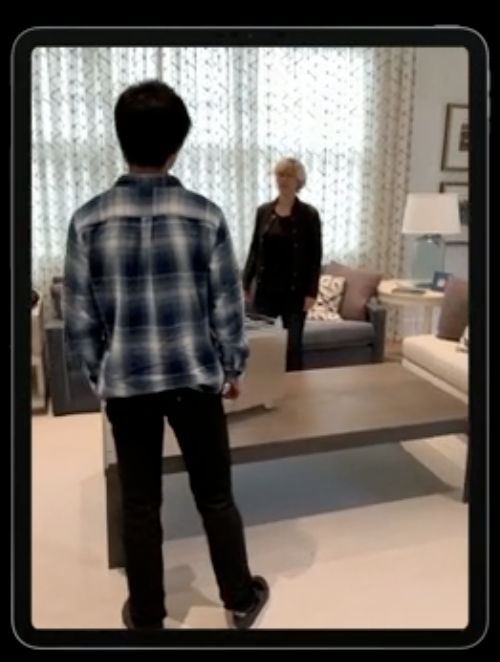 ARKit3 enables us to provide this functionality.

In ARKit2, the AR object would simply be overlayed on top of the camera scene.

Now, we need to have different things in different "depth frames". This is a "depth ordering problem". The graphics pipeline already knows where the rendered object will be using the depth buffer, but we need to understand where people are in the scene. ARKit3 introduces the Segmentation and People buffers, which are generated using the A12 chip and machine learning. 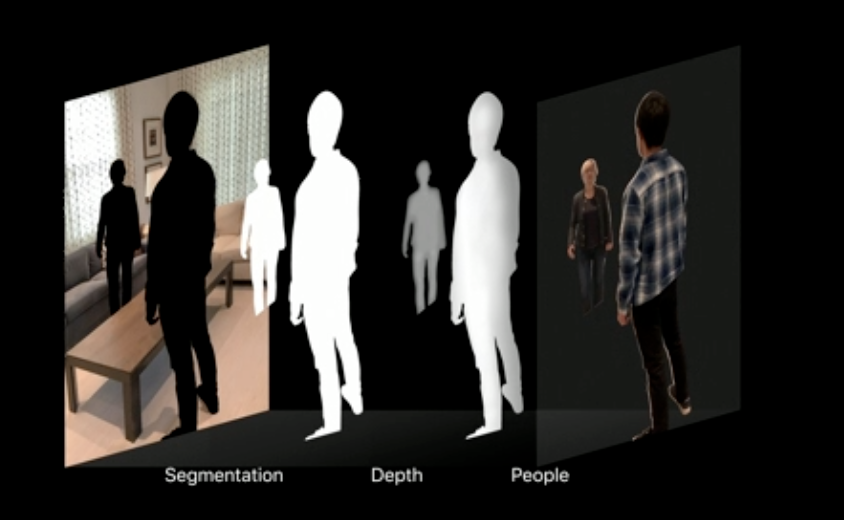 These two new buffers are exposed on the ARFrame as two new properties:

These are generated in real-time at the same cadence as the camera frame, i.e. 60 fps.

We would also like these to be at the same resolution as the camera image, but the neural network only sees a smaller image that is missing a lot of detail.

To compensate for that missing detail, ARKit3 does some additional processing called matting. Matting uses the segmentationBuffer as a guide to look at the camera image and figure out what the missing detail was.

There's a lot that goes on behind the scenes, but they're making it as easy as possible to adopt this. It's available in RealityKit, but it's also added in SceneKit's ARSCNView. And, in case you have your own renderer or you're working with third-party rendering, you can incorporate it into your own app using Metal.

RealityKit has a new UI element called the ARView, which provides an easy to use API for AR photorealism. This is the recommended way for new apps because it has a deep renderer integration, meaning that the entire pipeline expects people occlusion and works with transparent objects, so it is built for optimal performance.

As an example for what you can build now, see SwiftStrike at timestamp 8:15.

What if you've been using SceneKit?

All you have to do is enable frame semantics. However, composition is done as a post-process, so it may not work as well with transparent objects.

What if you have your own/third-party rendering engine?

You can use Metal for complete control of composition. Metal provides a new class for generating matte.

To review, matting is the process of finding details that the ML engine missed: 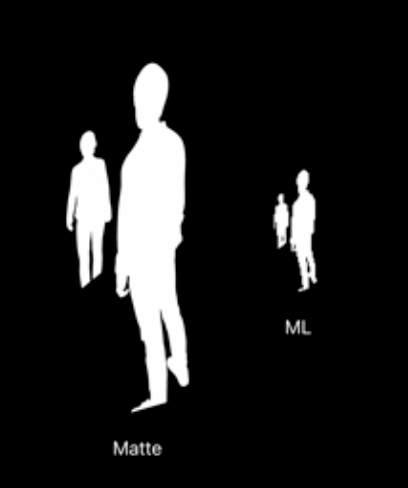 Let's look at some code.

The new object for matteGenerator is here:

But we're not done yet. Just like the segmentationBuffer was of a lower resolution, the estimatedDepthData is also lower. If we simply magnify it and overlay it on our matted image, there might be a mismatch. We can have depth values where there's no alpha value in the matte, and more importantly, we can have alpha values in the matte where there's no corresponding depth value. 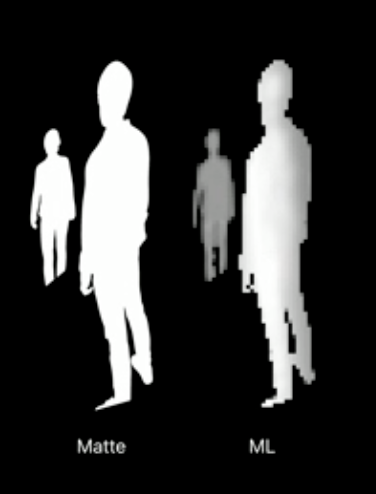 Because the matte has already recaptured some missing detail, we can't modify the alpha itself. Instead, we need to modify the depth buffer.

Going back to the previous example:

Add a function call underneath from the same ARMatteGenerator class:

This function ensures that for every alpha value we find in the matte, we have a corresponding depth value that we can use when we do our final composition.

Now let's move on to composition. Composition is usually done on the GPU in the fragment shader.

A way to animate a virtual character that performs the same set of actions as the person you're looking at. 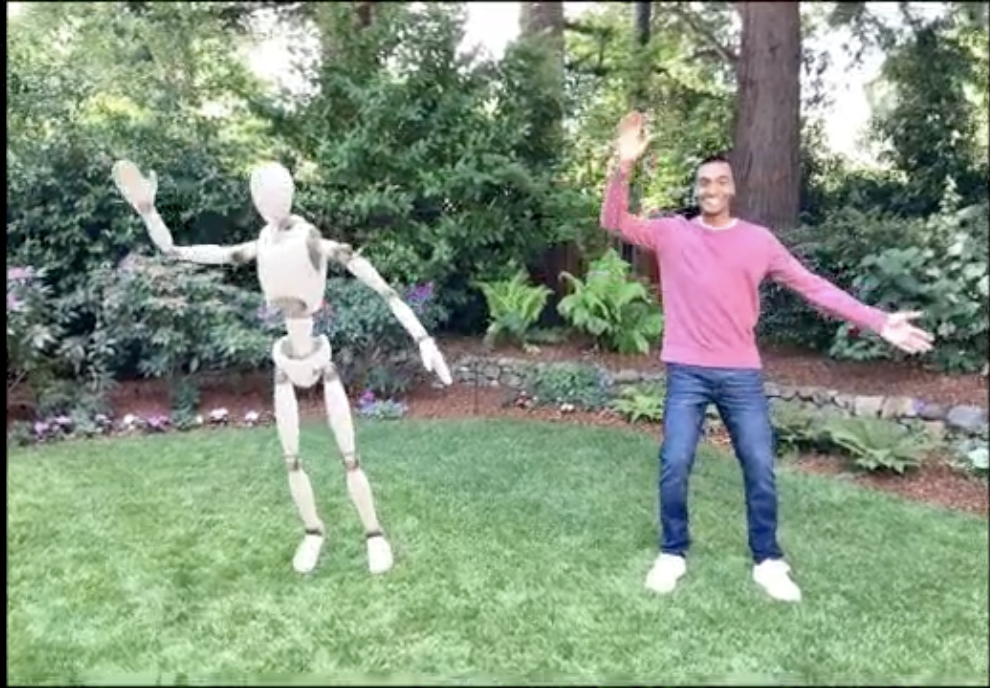 Has 2 main components: An outer coating (mesh), and the bony structure inside (skeleton).

The skeleton is the driving force behind the entire character, so we need to animate the skeleton and the mesh will follow. Machine Learning estimates the pose of the person in the image, which builds a high-fidelity skeleton. The mesh is overlayed to give a final character and is presented with ARKit3 + RealityKit. This is available on A12 devices and later.

How to Use It

The tracked person is easy to access using AnchorEntity objects that automatically capture the required transforms for motion capture.

As an overview, the bodyTrackedEntity represents 1 person. It contains the underlying skeleton and its position. It's tracked in real time and gets updated every frame. It combines the skeleton to give an automatic mesh and the full character in a .usdz model.

You can use your own characters as long as they follow the skeleton naming scheme. The skeleton has 91 joints.

2. Extracting Data from Skeleton in 3D

Let's walk through this structure.

ARBodyAnchor is just a regular anchor that contains a geometry (the skeleton). The skeleton consists of nodes and edges, just like any other geometry.

The transform is just the location of the anchor in rotation and translation matrix form.

The first one is relative to its parent. If you want the location of the right hand relative to the elbow, you use this these functions on the ARSkeleton3D object:

If you want the transform relative to the root (hip), you use:

If you want a list of transforms for all the joints you can get them with the following properties: 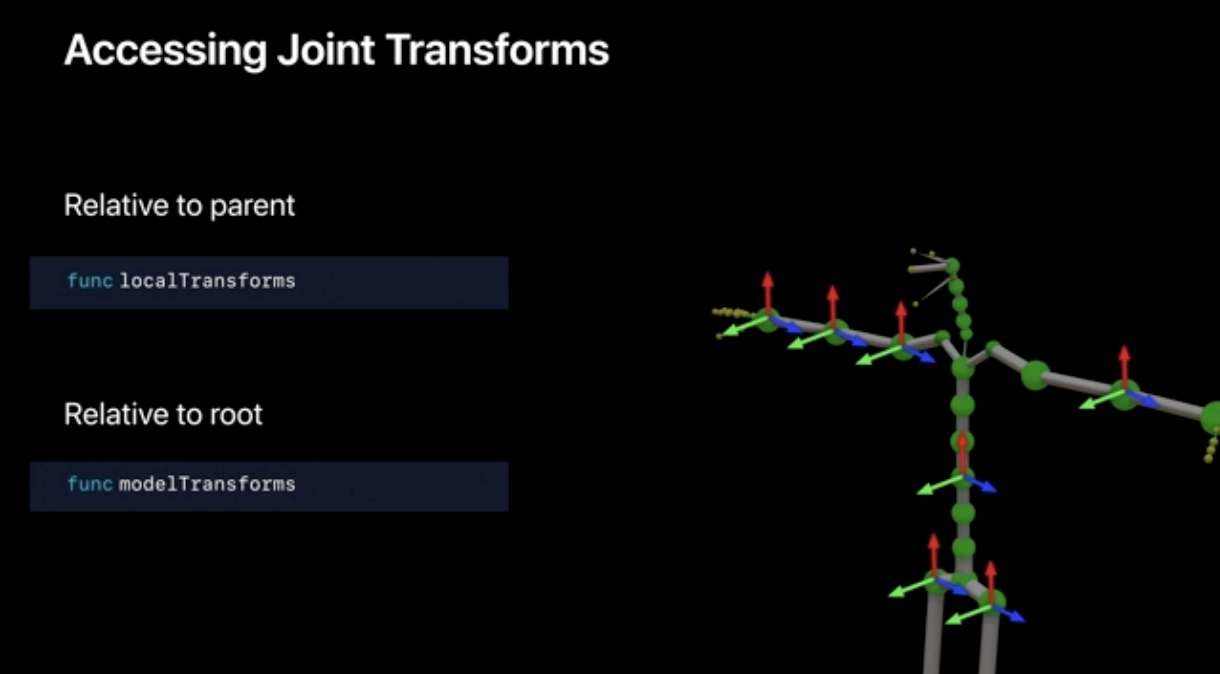 Note that there are many code updates with visualizations. If you would like to watch all of them in the video, see 29:43

3. Extracting Data from Skeleton in 2D 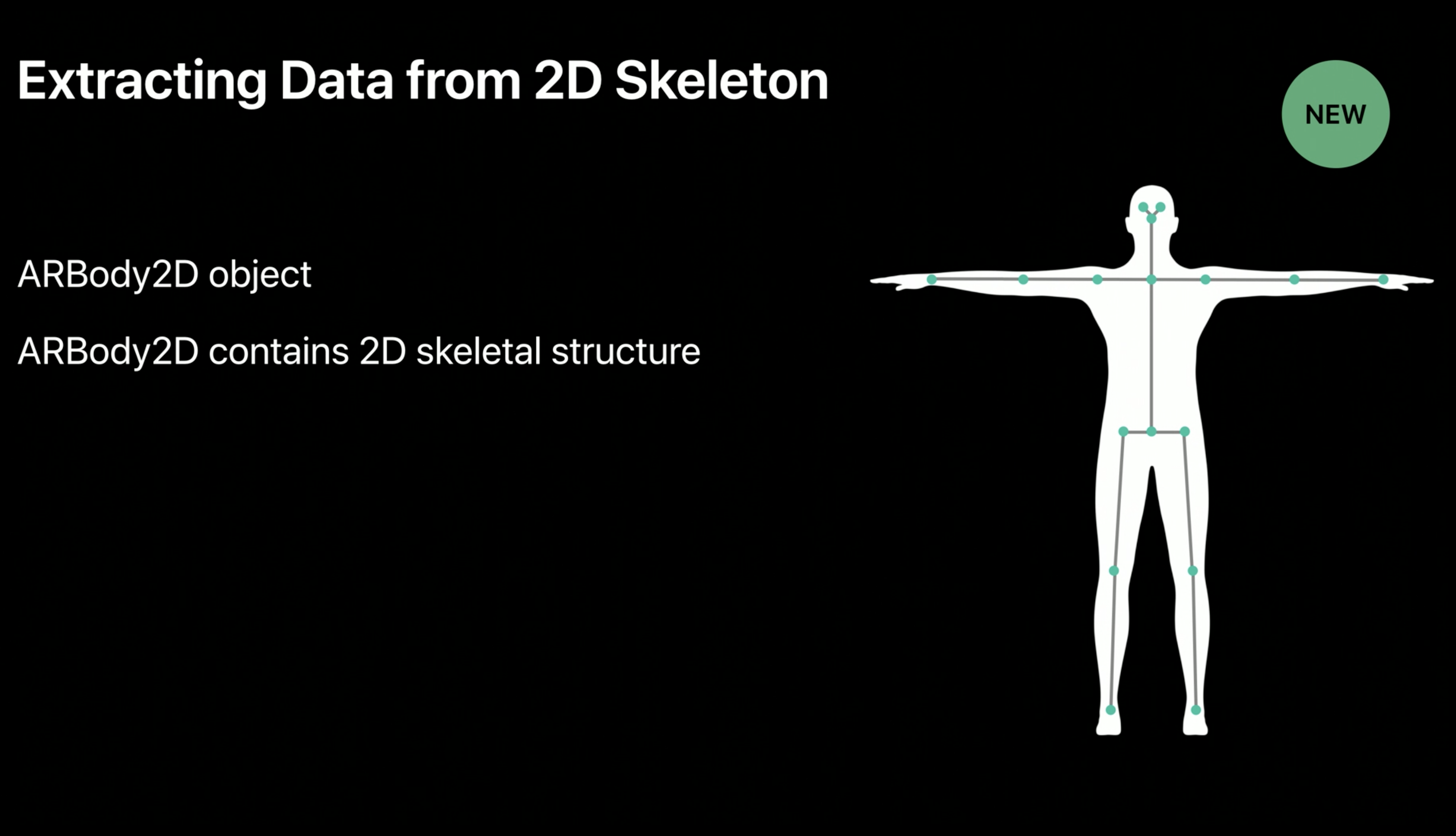 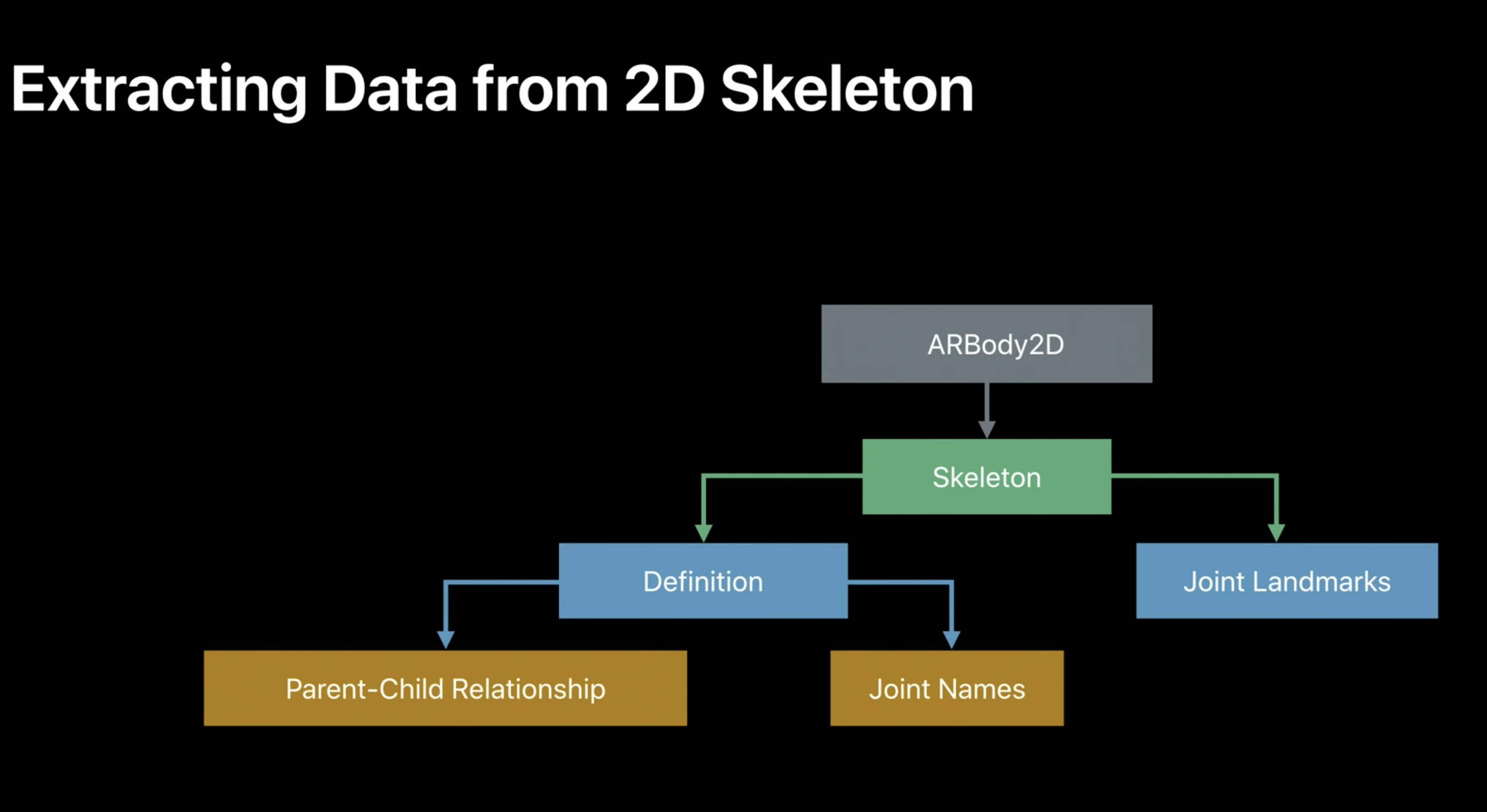 You can easily access the ARBody2D object in 2 different ways.

If you're already working in 2D space, you can access it using ARFrame:

If you're working in 3D space and working with a 3D skeleton, but you also want the corresponding 2D skeleton in image space, you can use the following code:

Points are in normalized Cartesian coordinate space, as shown below: 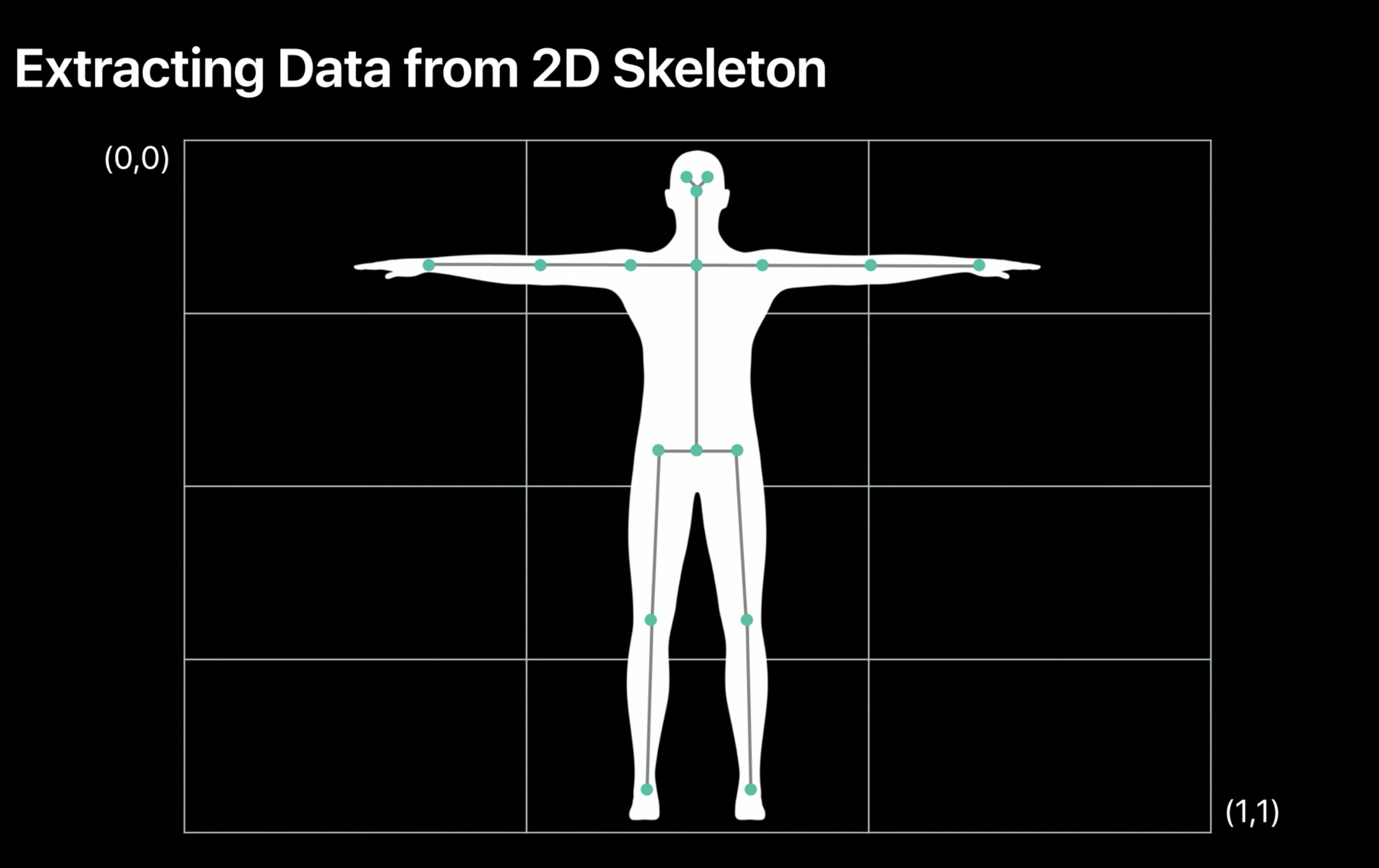 Note that joints are called joint landmarks because they are pixel locations in an image: 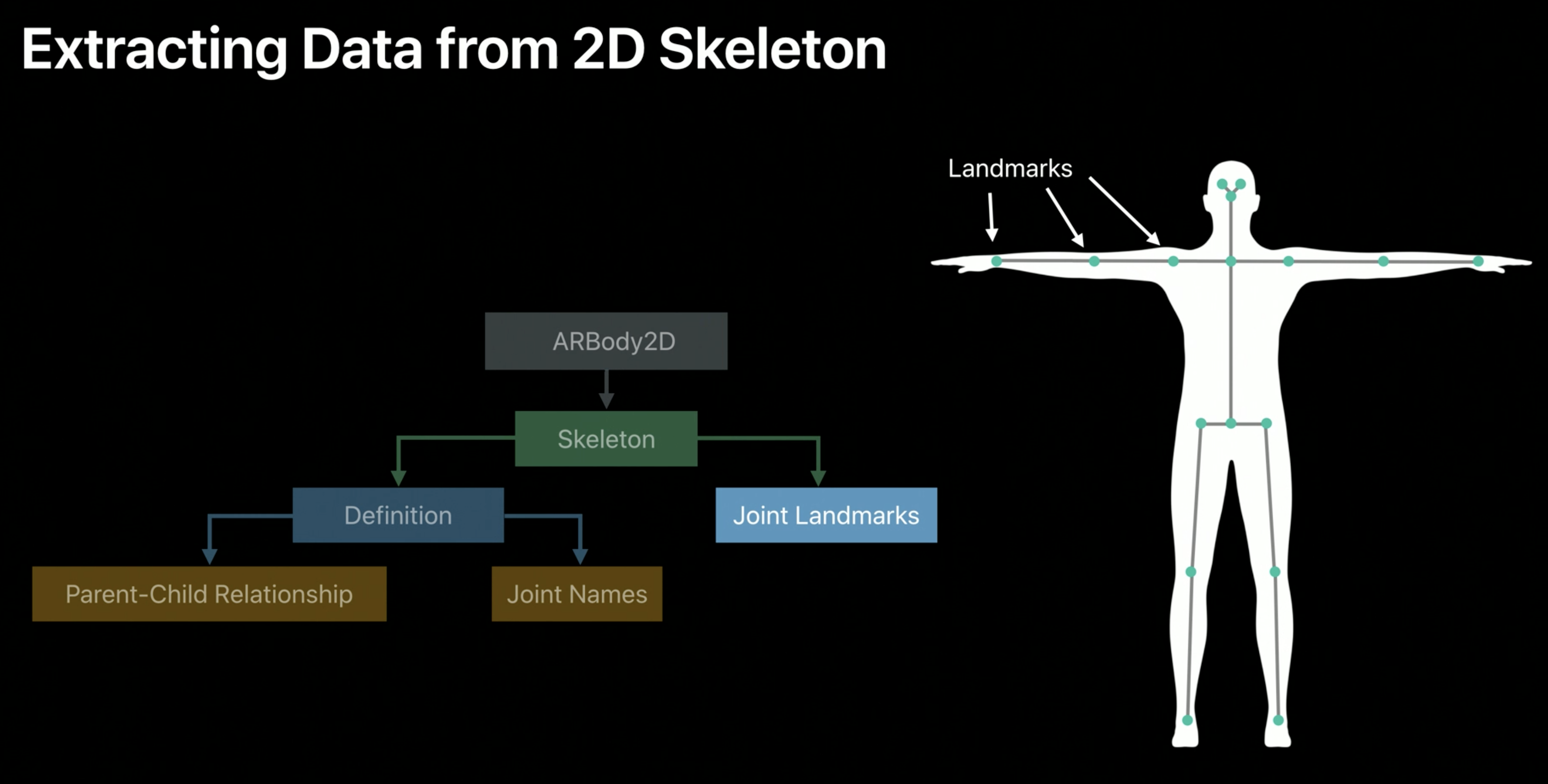 Just like the 3D version, there is a definition object with joint names and parent-child relationships.

While the 3D version has 91 joints, the 2D version has only 16 joint landmarks. They also have semantically meaningful names, like "Right Foot" and "Left Shoulder" and "Head". The root node is still the Hip joint, and parent-child relationships work just as the 3D version.

The approach is very similar to the 3D version: 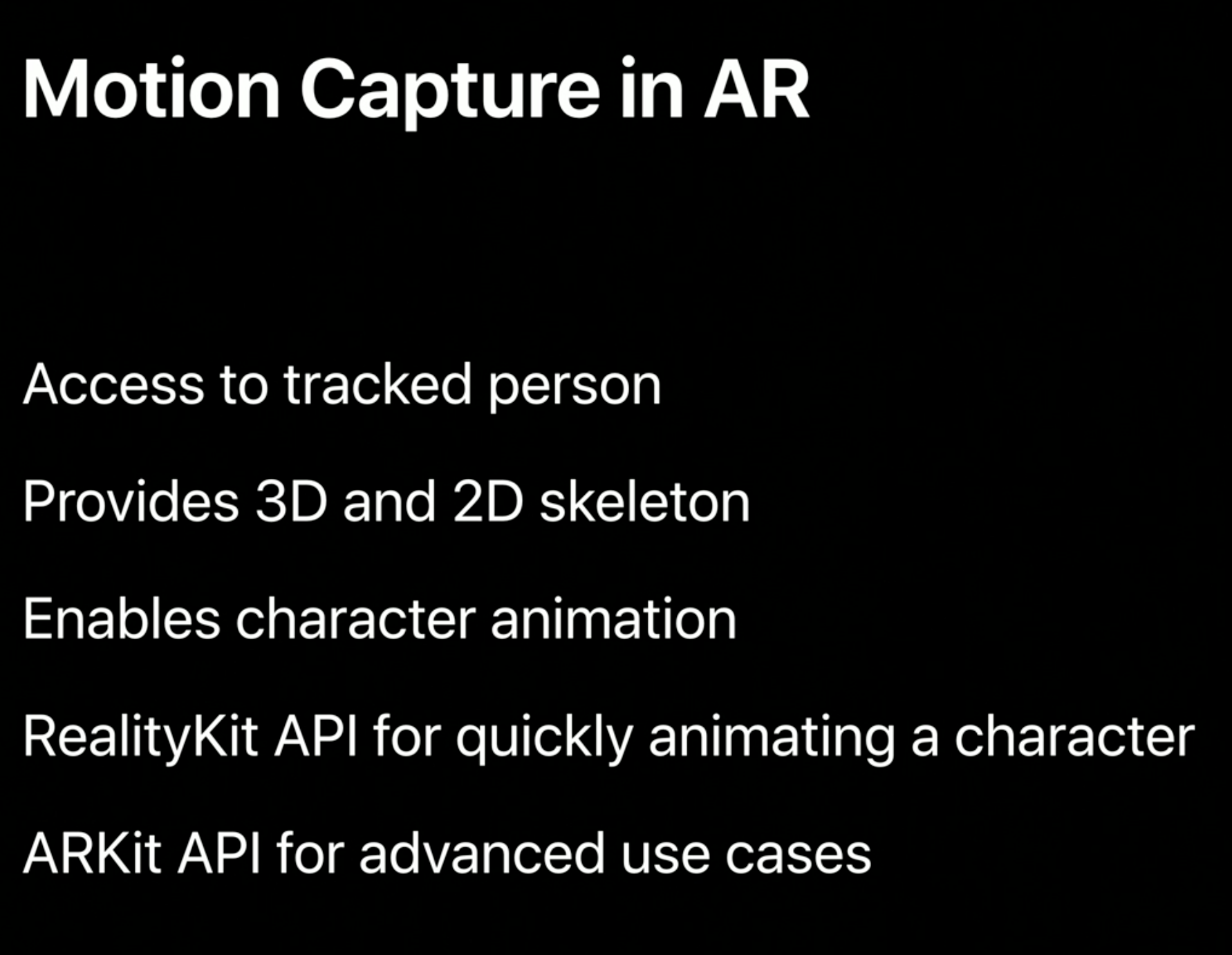 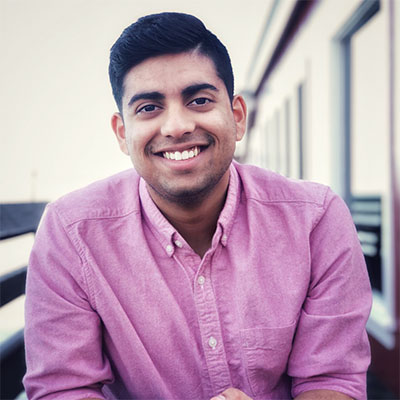