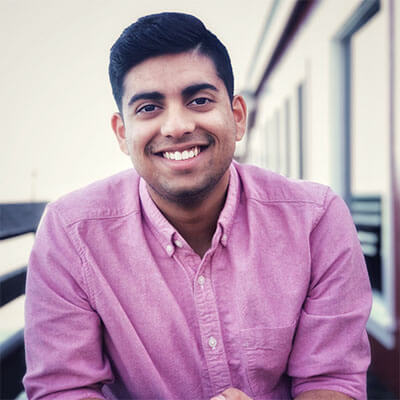 Description: Swift supports rich first-class value types in the form of powerful structs, which provide new ways to architect your apps. Learn about the differences between reference and value types, how value types help you elegantly solve common problems around mutability and thread safety, and discover how Swift's unique capabilities might change the way you think about abstraction.

In Swift, we get reference semantics with classes.

Let's set the thermostat of our home:

Now let's bake something for dinner. We need to heat up the oven:

Why is it so hot in the house? Because we unintentionally shared the same temperature object, and now both the thermostat and oven are set to 425 degrees. Here's the object graph:

To prevent sharing, we need copies:

Technically, we don't need this last copy, but we might still do it so we don't run into the same issue next time. This is called defensive copying, and we end up having to do this for our Oven, Thermostat, and any other object that might require a new temperature.

Copying in Cocoa[Touch] and Objective-C

All of this results in a performance loss, and bugs can still show up any time there's missed copies.

However, there are several problems with immutable reference semantics:

This leads to awkward interfaces. Before, if we wanted to increase our temperature by 10 degrees Fahrenheit, it was simple:

Without mutability, we have to get the temperature and then create a new temperature object:

This is more awkward and less performant because we need to allocate another object on the heap.

Getting a little more mathematical--the Sieve of Eratosthenes is an ancient algorithm for computing prime numbers. This algorithm lends itself very well to mutation.

This is the mutable implementation of the algorithm in Swift:

The algorithm basically creates an array of numbers from 2 to n. The outer loop walks through the array. The inner loop, going right, sets all multiples of that number to 0. The algorithm then returns only non-zero values from the array, which is all the prime numbers.

We can also express this algorithm in a world without mutation. Here is the implementation in Haskell, a purely functional language:

We can do exactly the same thing in Swift:

This immutable algorithm is very similar to the mutable one. Assuming the array isn't empty, we take out the first number (2), which is always prime. We then perform a filter operation and copy over all array elements that are not divisible by that number. Then we recurse, and we build up the prime numbers on the left-hand diagonal. These are concatenated together to get the result.

Unfortunately, this algorithm is not similar in performance. The problem is the filter operation. In the original mutating algorithm, we only walked over multiples of the prime number, which get more and more sparse as the multiple increases. Moreover, we only have to do addition to get to the next element. Overall, the mutating version does less work per element.

Cocoa[Touch] has a number of immutable classes:

There are also downsides to immutability. In Objective-C, if we wanted to start at our home directory and successively add path components, we would have to create a new NSURL object on each loop iteration:

There's a better way to do this--we could just add the components to an array and create a single new NSURL instance at the end. However, if we want to be truly immutable, we have to create a new array on each iteration of the loop...which is still O(n^2):

The correct way to do this in Cocoa is to use mutation--we need to store all our components into an NSMutableArray and then create the NSURL at the end, which is O(n):

Immutability is a good thing: it makes the reference semantics world easier to reason about, but we still can't go entirely immutable.

Let's take a different approach. We like mutation because it's easy to use when done correctly, but the problem is data sharing.

Value types solve this problem. Mutating one variable of some value type will never affect a different variable:

We're used to this with fundamental types like numbers and perhaps CGPoint--we would never expect that a change to b would affect a.

We can take this same principle and extend it to more complex types.

In Swift, any tuple, struct, or enum that contains only value types is also a value type. It's very easy to build rich abstractions entirely in the world of value types.

Value types are distinguished by value

Equality is established by the value of a variable, not its identity or how we arrived at the value.

This makes perfect sense for fundamental types like Integers...

...so we can extend it to less fundamental types like collections:

We can't understand our code unless we have reflexive, symmetric, and transitive notions of equality.

Fortunately, it's very easy to conform to Equatable. After declaring conformance, we just have to implement the equality operator for our properties. Generally speaking, when we compose value types out of other value types, we can rely on the underlying == operators defined for each property.

Unfortunately, we run into an error when using this new struct:

All we have to do is change let to var, and our code works perfectly fine because both thermostat and oven have their own instances of Temperature values. There is no more sharing, and the values are also inlined into the struct so we get better memory usage and performance: 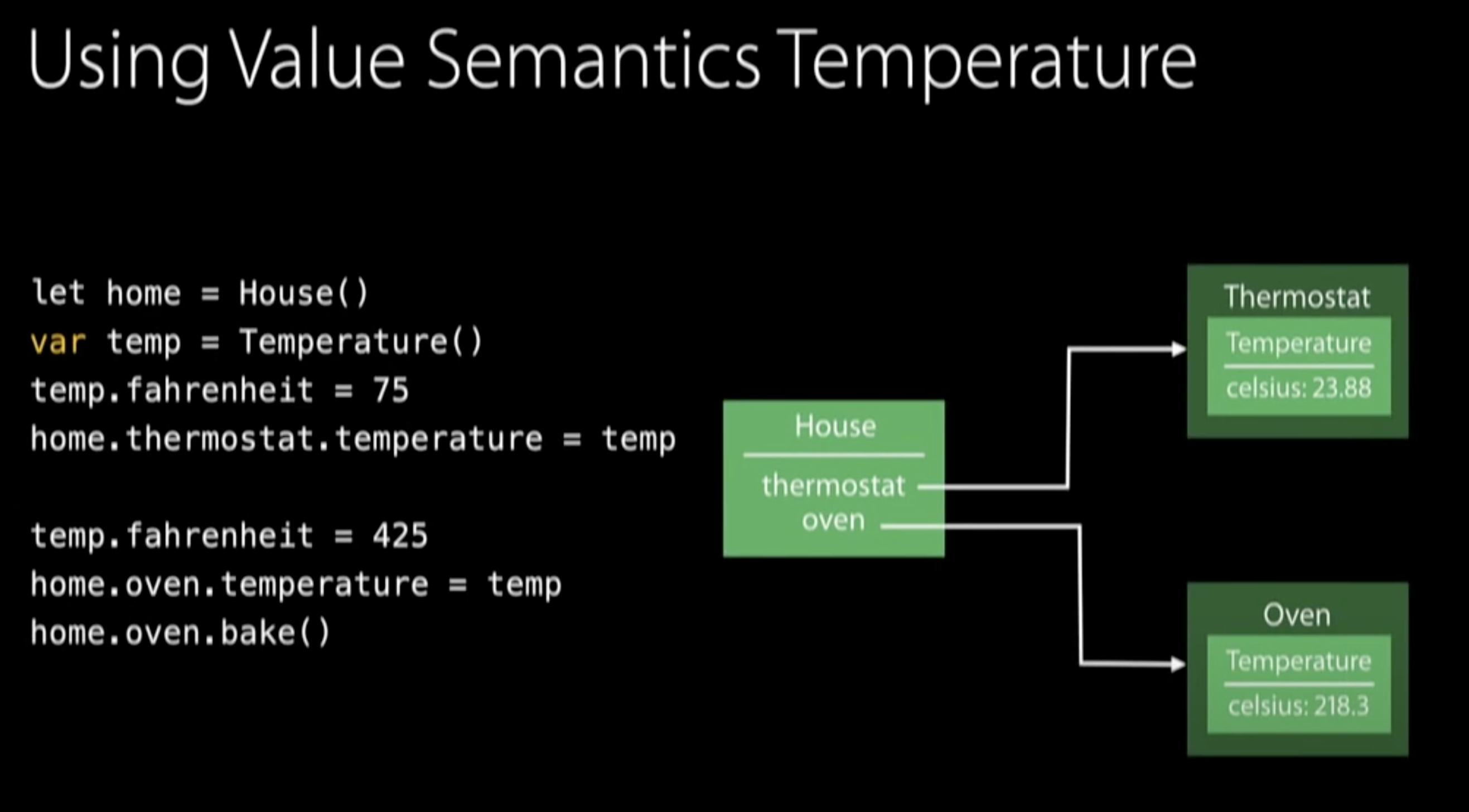 Mutation when we want it, but not when we don't

Value semantics work well in Swift because we already have keywords to indicate mutability.

let means the value will never change, which is a very strong statement!

var means we can update the value without affecting any other values in our code (no data sharing).

This gives us controlled mutability with strong guarantees throughout our code.

Passing value types across thread boundaries means we don't have to worry about race conditions on those types.

What about all those copies?

Copies are cheap (O(1)) with value semantics. Let's build this from the ground-up:

We're going to build a diagram made out of some simple value types like circles and polygons. 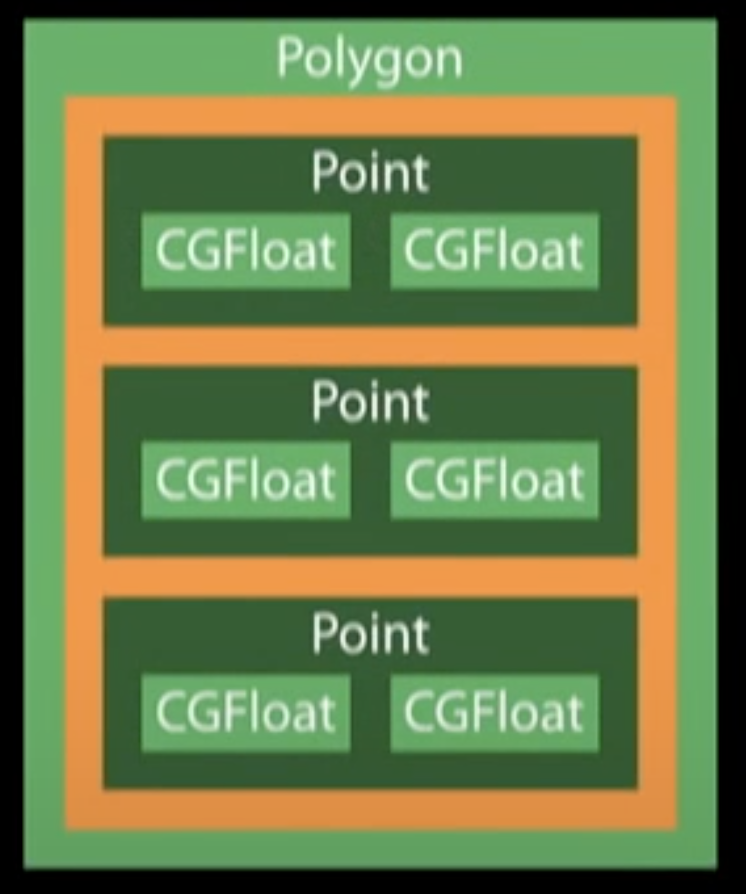 Diagrams need to contain either shape

We can just make both Circle and Polygon conform to a new protocol, Drawable. For more information, see Protocol-Oriented Programming in Swift. Here's the protocol and conforming implementations: 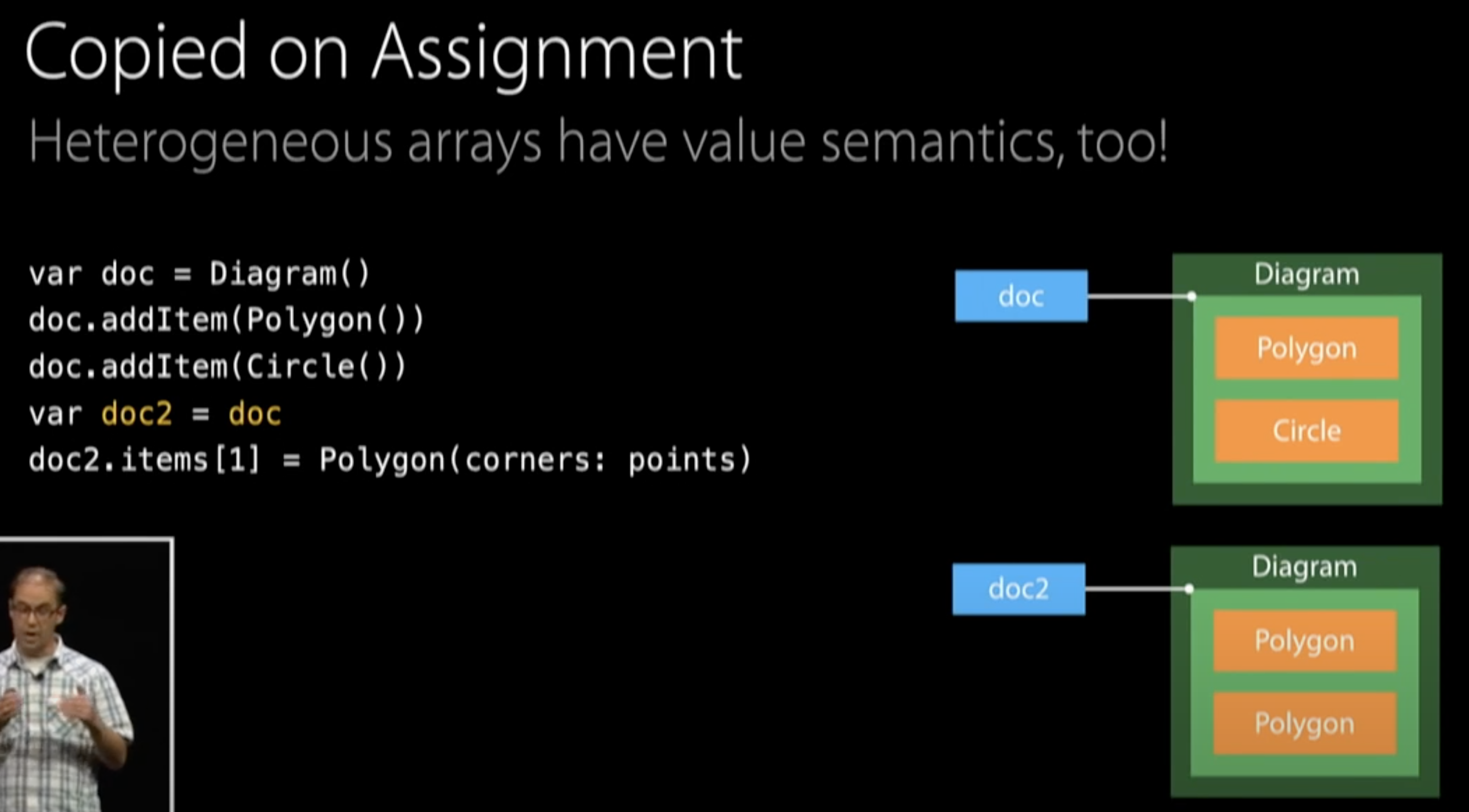 The straightforward implementation would be to just use equality for each item in the items array, but this causes an error:

Diagram already has a draw() function, so all we have to do is declare conformance:

We can actually add a new instance of Diagram to the first Diagram, and it's all contained inside the items array:

We can even add the diagram to its own items array:

Why doesn't this cause infinite recursion? Let's look at the implementation of Diagram.draw:

If Diagram used reference semantics, we would get infinite recursion. Calling draw would iterate through items, and eventually it would call its own draw again...and again.

However, we're using value semantics. We get an entirely new copy of Diagram that is not equal to the original Diagram because it doesn't have itself in its items array: Value types are generally used for "primitive" data of objects:

A value type can contain a reference

Copies of the value type will share the reference:

This is not going to cause issues (like with Temperature) because UIImage is immutable. We don't have to worry about image2 mutating the image it shares with image.

Let's implement Equatable for our struct. Notice the === operator that checks if both image properties point to the same UIImage in memory:

This would work in the example we have, but what if we create 2 separate UIImages using the same underlying bitmap?

These should also be considered equal. However, even though both UIImages were created with the same bitmap, they would have different references, and our === operator would consider these images unequal.

Reference identity is not enough

Instead, we should use the isEqual method that UIImage inherits from NSObject:

This BezierPath value type is made up entirely of a reference to a mutable type, UIBezierPath. If we have 2 BezierPaths pointing to the same reference, calling addLineToPoint is going to cause problems for both objects.

Also notice that there is no mutating keyword because path is a reference type. This is a bad situation because we're not maintaining value semantics even though we're using value types.

We need to separate accessors for reading and writing so we maintain value semantics.

Now, if we use BezierPath, we share references as long as there's no mutation...

...and when we mutate, we first create a copy so path2 is not affected:

Forming a path from a Polygon

Because of the copies, we may see a performance hit. A better implementation carefully uses mutation:

Swift can tell us if objects are uniquely referenced, so we can avoid making copies if we don't need to. The Swift Standard Library uses this feature extensively.

We're going to create a diagram and an array of diagrams. With every mutation, we add our doc to our diagram array. 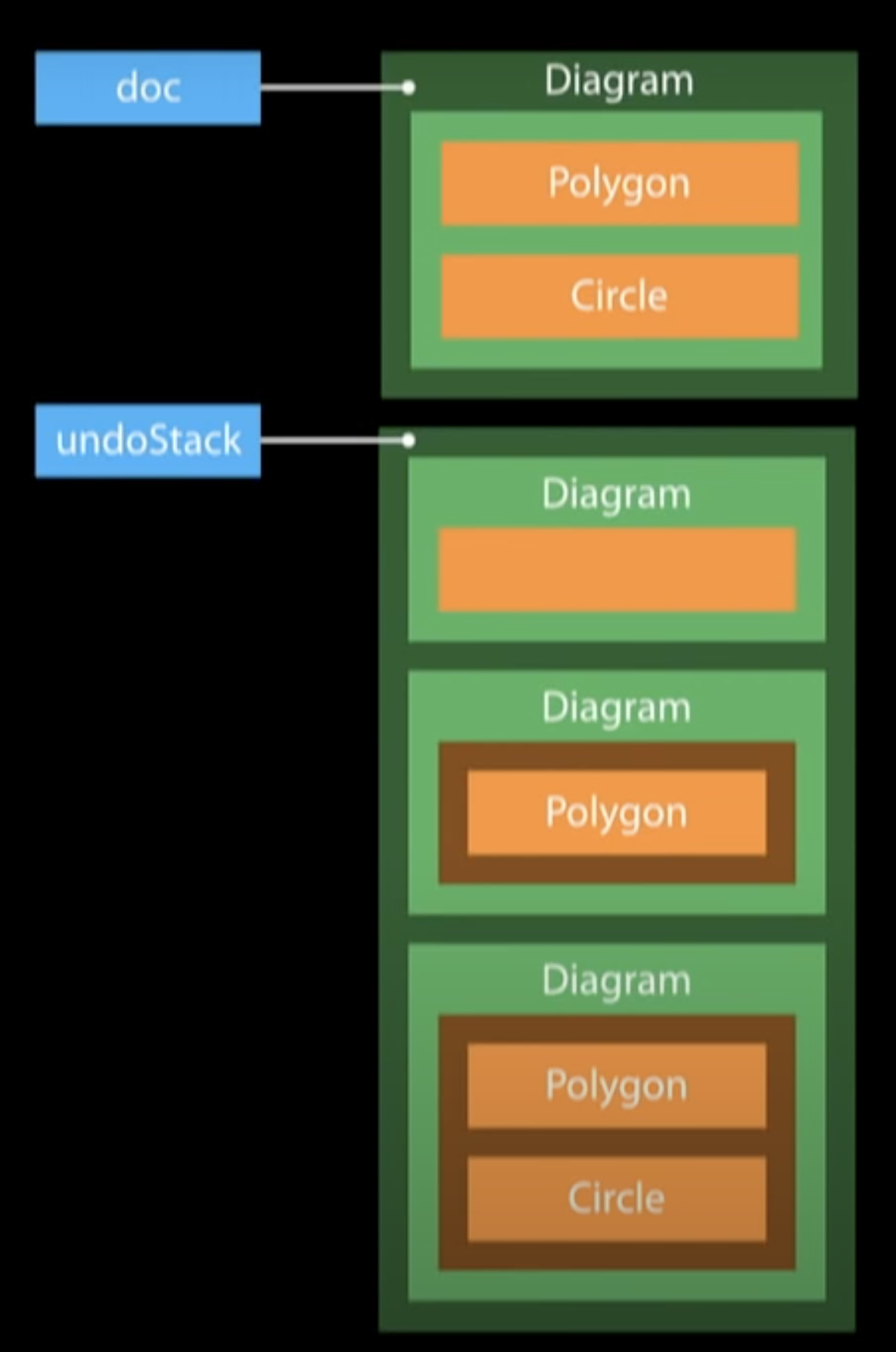 Now, our undo_stack has 3 distinct instances of Diagram. These aren't references to the same Diagram because we're using value semantics.

In an app, this could enable a history feature that gives us a list of all our states. We can easily go back and forth just by indexing into the undo_stack. 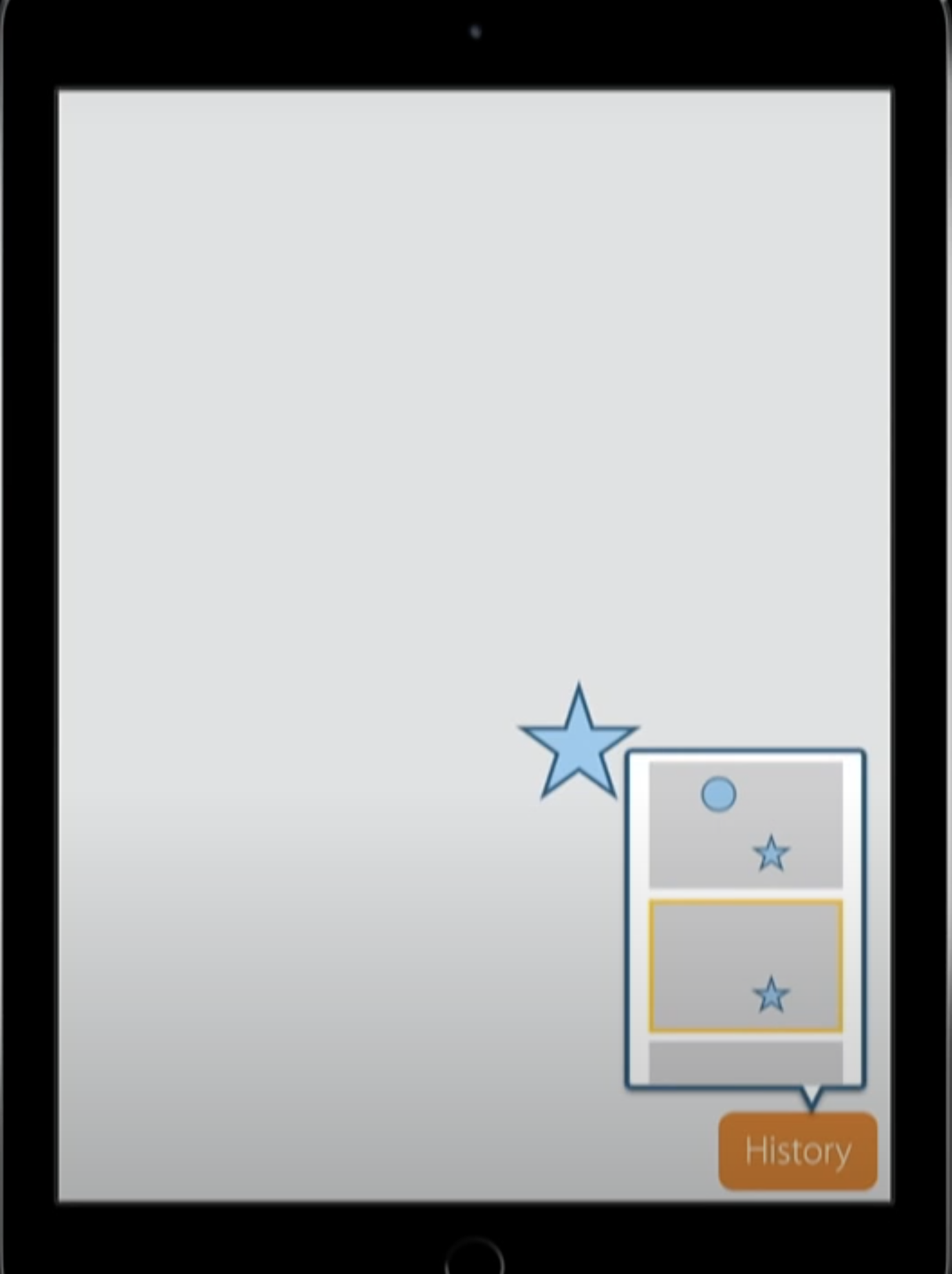 In fact, Adobe Photoshop uses value semantics to implement their history feature. Every action results in a new doc instance, and this is efficient because of copy-on-write.